(This story has three parts. It was too big to tell in just one meager posting. Here’s the link to the Part One : Serenity Now.)

I received my Social Security card in the mail on Thursday, April 5th and I was back at the MVA at 11:39am. Everyone else was there too. My focus now was on taking that driver’s knowledge test. I needed some progress.I could feel the anticipation in my shoulders and saw it in the bouncy leg of the woman next to me. I jealously watched the happy teenagers walk away with their new licenses as a Level 42 song fell on my head from the speaker above. My number came up.

The nice lady who deserved a thank you note was on station number 8. Unfortunately I was called up to counter 9. My documentation was all there but my “Everything’s gonna be alright” attitude was “gone Daddy gone”. Something told me she didn’t really feel the love for her job like the nice lady next door did.

The social security card was not in its envelope and that was a problem for her. I said, “But I just got it in the mail this morning and the envelope is in the trashcan”. So quickly, I felt the tears rising again. If I took another trip home to retrieve an envelope, it would be my undoing. Then she was indignant that the payment part was missing from the bill I had brought. And that I’d ripped off the other part of my voter’s card to fit it in my wallet. I don’t know how I escaped her torturous clutches but I was shaken when I headed to station 11 for my test.

Again, faking it until I made it, I sat down to take the knowledge test confident that I was a good and seasoned veteran driver. Did you know the legal blood alcohol level in Maryland is .08% not .02 %. Erratic lane changing is a symptom of aggressive driving. You can actually use your cell phone in the car but only in emergencies. And double yellow dashes mean something other than what I guessed. I had failed the drivers test at 45 years old. The gentleman asked if this was my first time taking the test. “In thirty years”” I said. He laughed and said I could retake the test tomorrow. Mt text message to my friend read, “Please, kick my puppy again”.

I got the drivers-ed book from the library that afternoon. As I studied on my back porch, I reached up and found one of the earrings my sister had just given me was gone. Another casualty of my week. Much to the dismay of my men, I began to bawl. The big man kept the little man from telling knock knock jokes to cheer me up. They allowed my despondency for 10 minutes. Then it was bath time.

The following day was Friday. I returned to the DMV now a shadow of my former confident self. I passed the knowledge test and got nary a question wrong. Then a gentleman referred to the woman behind the counter who would schedule my driving skills test. Yes, they said schedule. The next available appointment? May 14th, a month plus in my non-driving future. And no, they wouldn’t call me if there was something sooner, although the nice supervisor said I could call him to ask about cancellations every day.

(TO BE CONTINUED TOMORROW. Expect the end to the story and for me to pontificate on what  it all means.) 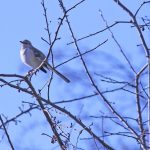 Part One : Serenity Now or Pulled Over Again 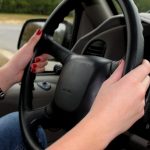 Part Three : What Does It All Mean ?