(This story has three parts because it was too big to tell in just one post. Tomorrow night’s post.? The Beatings Will Continue Until Morale Improves and the third part What Does It All Mean?)

A half hour into April fool’s Day 2012, I was being pulled over on my town’s bypass 100 yards from my exit home. My dinner party buzz was long gone when Officer Buck-something informed me of my ten mph driving overage. My blouse wasn’t low enough to save me from the rest of the story.

When the nice officer asked if I knew my license had been expired for over a year and a half, I exclaimed “You’re sh**ing me!” And when he handed me my $70 ticket, I thanked him. He laughed when I added I’d probably be the only one thanking him this week. I wasn’t thanking him by the end of the next week.

Had I seen or received that notification of my license renewal, I’d surely have gone straight to the DMV and renewed the damn thing. I balance my check book the moment the statement comes in the mail. A look back on my 2010 calendar showed my mother’s knee operation and a large event I was planning at the same time. My brains were probably scrambled.

I arrived at Easton’s Department of Motor Vehicles early Monday morning. If I had a plan, it was to just show up and then everything would turn out fine. They refer to that as denial. A mockingbird sang loudly in the bush outside. Maybe a symbol of my innocence or my individuality which was about to be crushed into a paste. I checked in and then turned right back around to go home and fetch all the documentation the gentleman said I actually needed.

See, when your license has been expired for more than a year, you have to take the knowledge and drivers tests again. As I drove home, I tried to remember the catch phrase they were neurotically screaming at the end of a particular Seinfeld episode.

On my return to the DMV, the nice lady named Rochelle said the documents I brought proved I lived in my house but I needed my social security card or a recent W2 form to prove my American citizenship. My tax documents weren’t acceptable. My original Social Security card was stolen with my wallet 10 years ago. And I don’t work. Cue my first teary moment. Then the catchphrase came to me; Serenity Now!  Serenity Now!

The Social Security Administration was behind a Wal-mart 20 more miles Southeast in Cambridge. After my half hour wait with an older gentleman from deeper in the Eastern Shore who showed me a booby picture on his phone, the nice lady told me my expired driver’s license was not a valid form of ID. No real surprise there. My intuition had decided to show up during my ride there and had warned me of this possibility. Did I have a life insurance policy handy? I got teary eyed again. How about a note from my doctor? Good thing I’d been sick once and had a doctor…back in Easton.

I drove back to Easton to beg for a form from my doctor’s office signed in red, green, and blue ink but absolutely not black ink.  An hour later I was back at the SS Administration swearing that everything I told her was true. She handed me the application receipt for my card and informed me I could now go home and wait for my card to come in the mail.

“Thank you sir, may I have another?”

After driving 120 plus miles around on my expired license, I returned home to wait. My shoulders were tense, my eyelid twitched and I chewed on my lip like it was dinner. My Now had no stinky Serenity in sight.

(TO BE CONTINUED TOMORROW) 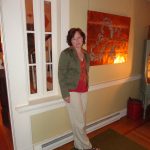 I’m Square Me in My Round Life 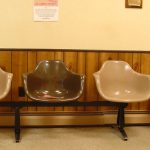 Part Two: The Beatings Will Continue Until Morale Improves