There was a long standing tradition of making homemade tacos in my house. My Mom brought the technique with her when we moved to the East Coast from California when I was 6 months old. And although I do sometimes use the cardboard boxed tacos for a quick dinner for a 9 year old, I also am capable of pulling the real deal out of my sleeve.

Tacos are a special occasion when guests come to visit kinda endeavor. Because it’s a lot of impressive work that results in some of the most tender delectable yummy food ever. And a couple of weeks ago, our girl Caitlin came to visit and I decided that I was in the taco making mood. No better excuse for the effort than company.

The process begins with making the dough and forming balls. I use wax paper to smash the tortilla dough on the tortilla press.

Then I take a rolling pin to it to make it a little thinner. Cooking once on the griddle, the dough hardens into a tortilla ready for frying.

Not pictured here, the wax paper that is hanging off the griddle catching fire while you transfer them. Once the tortilla gets transferred to the hot oil, it puffs up as you bend it into the ‘U’ shape ready for filling with taco meat, cheese, shredded romaine,avocadoes, sour cream, and siracha sauce. The house fills with smoke from the hot oil. So there’s a smoke alarms turning off and windows opening thing that makes this a real culinary adventure.

I made some homemade salsa fresca from our tomatoes, cilantro, onions, and dashes of sushi vinegar and cider vinegar as I had no lime.

As with fresh pasta, freshly made tacos are such a different beast than anything you’ve ever had. And worth every firey bit of wax paper and smoke burning your eyes with the smoke alarm scaring the cats moment.

I must admit that this finished shot is from a previous batch of tacos. Because in the frenzy of making and eating them this time, there were no more pictures to be taken. The filling this time was a pork. It’s the most easy and satisfying. A pork picnic/shoulder roast cooked at a low temperature for a long time then falls off the bone and is easily shredded. I added chicken stock, cumin, sauteed onions and peppers, and maybe some chili , onion, and garlic powders. But ground beef or poached shredded chicken or even rockfish are all good choices especially with salsa fresca. And a secret sauce tip? Use sour cream mixed with the adobo sauce from a can of chipotle peppers. Creamy and smoky and spicy and you are a genius.

I don’t expect anyone to run out and try this. It’s not for the faint of heart. But if you ever get a chance to try the real thing anywhere, do yourself a favor and eat a freshly made masa harina flour taco. Divine. 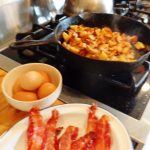 I Can’t Fix My Body

No Locks on Our Family Doors