Seems my inner voice can be quite contrary. When I pay attention to the louder conversations I am having in my head, I notice that I’m often using negatives to stop the conversations. As in, ‘I can’t do that because’ or ‘I don’t have time’ or ‘I’ll never have enough’.

We gave our 9 year-old a hard time for his extremist expressions. We were having a “discussion” and his part went something like, “why don’t your ever let me…? I never get to…” And the extremist opposite which is, “You always…”. And I realized that, although that is probably his age talking, if I don’t provide another example, I will be leading this habit by example right on through to his adulthood. They do as you do, not as you say.

What I suspect I’m keeping myself from when I use my ‘can’ts’ and ‘nevers’, is success. I have a fear of it you see. So I am cluelessly calculated. I will never Succeed if I don’t try. Nor will I Fail. Imperfectly won’t be attempted either. And so the nevers and can’ts make sure I’m in control of the outcome. Twisted and yet makes perfect sense.

I have this aching memory of being at a pool birthday party. Side note, I nearly drowned twice as a child but by this time, maybe 11 or 12, I’d learned how to at least tread water or do the frog, still my go to stroke. When you attend public community pools, it seems a standard practice to have the children perform and prove to the lifeguard that they won’t be the first to drown. And I refused to take the test. And dis-included myself from the fun. I was an outcast by my own choosing. But at least I was in control of not failing. Or of not being accepted into the group.

Conceptually, I could write down these thoughts as soon as I notice even a whisper of them. And allow them to sit somewhere until I’m ready to take a good look at what I need to do anyway despite myself. I can if I believe I can. Simple as that. I can’t if I don’t. But sometimes those negative thoughts disguise themselves as something else. Helpful and necessary perhaps.

When fear is standing in the middle of your psyche like a big bully daring you to pass, it’s prickly and oozy and scary and loud. It’s a familiar foe and may smack of too much effort to pass and shove your way by. But your story won’t get rewritten unless you redefine yourself right past that fear and into the “I can, I will, and I’m gonna” land beyond. 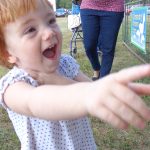 Our Day At the Alpaca Farm