Alas, sometimes we are forced to grow up, like it or not. From cute shrieking toddlers to rude six year olds, we proceed. And today, we are off to the dentist to have Eamon’s baby tooth yanked from his mouth.  As obstinate as my son ,the baby tooth refuses to leave even though his adult tooth has risen from his jaw in all its glory right behind it. Like it or not, that bad boy’s coming out. And of course I promised him a toy from K-mart for his trauma. Shot next week’ll warrant an ice cream. Happy Wednesday before Thankgiving.

Post Mortem: You can cry and still be brave. My little man lived to tell. In fact , shopping for a toy in the K-mart, he’d forgotten the whole incident. When queried later, he said it wasn’t as bad as he thought it was going to be.

My life this week 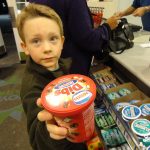