Is my kids two front teeth, world peace, and the end of hunger. Cause remember, I was lucky enough to have the spark of life happen in my belly at age 45. I don’t get to ask for nada for about 10 years. If I really want that new glue gun or that $20 bottle of olive oil, I’ll just get it myself if doesn’t appear under the tree.

Digression. Eamon’s toothless mug (they’ve grown back in since) will be appearing  on our Christmas cards this year. Remember how I was so happy I’d ordered my cards ahead of time in this post?  I then got them and my ghostly pale boy was so swarthy looking as to seem India indian.

So I emailed and attached and they gave me the go ahead to reorder. Catch was I had to lighten up the photo myself. I have a photo program I downloaded for free for just such occasions. Of course, I have absolutely no bloody idea what I’m doing. So it took me a little while. And when I had something I liked, I discovered a “make it a Jpeg” button and threw it on the desktop quickly. And when the photo card ordering program said it was pixelly, I said Humbug.

Happy to say I got my new and improved cards back and love them. Still loving the price.

Sidenote. Little senior had his first cavities taken care of at the dentist recently. He likes saying panoramic x-ray. The dentist “tickled” his tooth to sleep. It was an act of magic to see this man sneek the Novocaine shot in on my kid. He had no idea. Still doesn’t know even though husband asked him how the shot at the dentist was. Huh? And all cavity critters have been chased away from his baby teeth. Hats off to Dr. Eugene McNinch who is definitely a blessing to dentistry.

And speaking of shots, unbeknownst to us, Eamon was due up for his Hep B shot at his exam on Monday. He crumpled, I upped his earned point toy from five to ten dollars, and he came out of there crowing he’d gotten his Hepatitis B  shot. And then today, at the OB appt, I had to have a whooping-cough shot since there seems to be an outbreak and the baby won’t be able to be immunized until he/she is one. That one smarted.

I felt like sharing and now I’m done. Hope you’re having a shot free week. 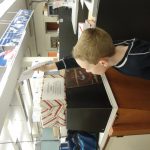 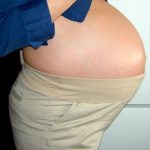 Seeing Myself in the Mirror