In another lifetime, I was another wife. I married my first husband when I was 23. We were destined for an 8 year-long unhappy marriage without kids. Eventually we divorced so that I could marry my now husband and have my children. The ex was a sad angry clown with a dream of being a stand up comic. He was a very funny somebody. One open mic night led to another and another and then more gigs, eventually he was headlining, writing radio commercials, recording a Christmas parody song I co-wrote, and hosting various fund-raising events.

We were in our 20’s, living gig to gig, and I often found myself in the back of dark clubs with the local Baltimore/DC comedian posse of up and coming comics. Blaine Capatch, Patton Oswalt, and Dave Chappelle were a few gentlemen who moved their careers from right to left coast and “made it” while the ex stayed behind, stuck. Glad for those guys. Sad for him. I met Ellen DeGeneres during this period.

The first time was in Baltimore around 1993 or 94 at a charity benefit for children. (I can’t remember the second time I met her. It may have been a show at the Slapstix Comedy Club in Baltimore.) The Ex was MC-ing and she was headlining, pre-Ellen sit-com time. I remember how lovely and sweet and very talented I thought she was. Her telephone conversation with God was the brilliant. She had a gruff long dark-haired girlfriend accompanying her who then went looking for cigarettes, and on returning, needed a light. I kindly provided her with some matches. They didn’t seem all that happy together. Or, I didn’t think this gal was worthy of Ellen and wondered why they were together. I was living that same disenchantment in my heart. Projection.

Having been on that “scene” and in and around the TV business, I can tell you celebrity hype is just that. You can’t always judge a book by the fame of its cover. Perfectly nice funny people may be completely miserable, living in their cars, shooting and snorting, and generally unhappy. You could ask them if they are unhappy and they may or may not tell you just like anyone else. The exception is always Ellen because she’s the exception that proves every rule. I certainly do hope that she is very happy in the life she’s living because I know she would wish me to be. Even if she’ll never remember me.

Never compare your insides to anothers outsides, my wise therapist said.  Fame and money mean bupkis. It’s how a person treats you that matters. Just like in high school, there will always be the underclassmen and the wannabes who’ll remember the person a ladder wrung above them. And the upperclassmen will be too busy looking above them still to see us below. The trick is to recognize that the place you are in now is good.  What’s up ahead of you might not hold the promise of peace, power, money, or retribution that you think it does. All you’ve got is the now to do the very best kindest most authentic work possible. And know that your stuff is just as good as their stuff. Be polite and respectful to everyone as you would hope they would be too you. Authenticity speaks volumes.

Ms. Ellen, you’re the real deal and people know it. Thanks for being an inspiration and an exception.

photo credit:Picture of Ellen by Thomas Hawk via photopin cc 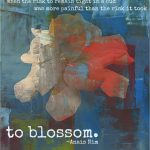 Getting Out Of My Head & On With My Life 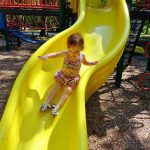