My butt got a good kicking by that Mercury in retrograde thing this past October. Maybe a little awareness that it was descending onto my life would have been good so I could have a heads up to brace myself for what was to befall me. Otherwise, nothing to do but wait the storm out. And what a storm it was too.

The month of October had taken on grand planning proportions. Great big happenings got crammed into it’s borders. First, a 30th High School reunion for the school I never ended up graduating from. Then the trifecta event weekend that included special event decorating for the Jazz Club themed fundraiser, the Blogger’s Meet-up I was organizing, and a trip into DC on my own via the Metro to a Smithsonian museum to hear Kim Werker talk Creativity, Ugly Style.

The week before the reunion, my worry and anticipation (read anxiety) turned into a black hole that I wanted to fall down into. All I could do was just go do something distractionary as my brain refused to listen to any reasoning. Thankfully, by the day of the reunion, I was happy with my outfit and wasn’t really nervous on my journey North West to the suburbs of Baltimore to see my classmates from 30 years prior at my high school reunion I would finally attend. It was a huge bookend for me.

The following weekend of the event trifecta, I kept putting one foot in front of the other and truly felt each endeavor was successful. It was a lot of stuff and yet I proved when you do your homework, think hard about what else you need to do, and then show up fully present, it all works out well. Maybe not as you’ve expected, but good anyways. And the cherry on top? Did I mention I was also writing and posting 31 days worth of blog posts simultaneously?

My two kids thankfully seem very happy and well adjusted despite my brain mayhem, and as the Halloween weekend came to a close, I felt like a rockstar Mama. My oldest had a case of Pneumonia starting Thursday and we still managed to take good care of him, go trick or treating, carve pumpkins, eat homemade waffles, and enjoy each others company despite being trapped in the house all together for the weekend.

There’s a very amusing Jewish folktale from Poland entitled “It Could Be Worse”. Essentially when you’ve had all of it piled up on top of you all at once and you’ve dealt with it, and then you take it away, you will appreciate the peace much more than you did before. Also, I now know that when I say I don’t have time, sometimes that’s true. And sometimes I’m telling myself this to avoid getting onto bigger stuff. Breakthrough stuff. Empowering stuff. Good stuff.

The biggest stuff I’ve recently decided I’m missing in my life is continued creativity. Spontaneous joyful creating just for the sake of creating. Stuff that doesn’t come from my think box but from the wind passing over my shoulder. And I truly know now that if that ain’t happening, nothing in my life is quite right. I’ve tried it the other way, doling out creative opportunity like it was some sort of reward for dutifully doing all of my other adult chores. It is hard and for what reason?

Currently, my house is clean, there’s laundry chugging, and I am ready to move on to the big blockages. I’ve been thinking a lot and I don’t like the story I’ve been telling myself and I want to rewrite it. The one where I can’t because? That one.

I’m off to start a new chapter in releasing creative flow and energy by tackling all the tasks I keep meaning to get to but secretly hold myself captive by not doing. The first one is Fiona’s room. I’ve been almost finished redecorating her room for a year now. And I’m tired of that never-ending story. It needs editing. So here’s to editing the story. I’ll let you know about my revisions. 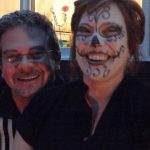 Day Of the Dead Art 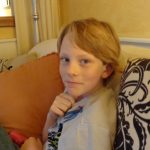