Christina just became a Missus this past month. She’s a friend I’ve made recently and she is just so beautiful and sweet. We met through the promotion and development of the town I live in. She lives in a charming town an hour to the north called Chestertown on the Chester River. And we have maintained a lunching chatting status for over a year and become friends. When I visited her with a wee Fiona Over the Bridge last year, that was the day she told me Dan had proposed. I was extremely flattered when she then included me and my husband in her nuptial celebration. Husband the lighting guy also did her wedding lighting and her sister’s too.

The wedding was held at an old Episcopal church deep into the Shore country in a parish that claimed to have been established in 1693. The church was tiny, had a turnbuckle holding the sides in, and had the charming waterside graveyard and gigantic tree for a wedding party photo-op.

She and Dan are just perfect for each other and their sweet anticipation for their moment was palpable in the church. And to watch her joy after wards was the cherry on top. Her beauty shone through her beauty. The pictures I took of her here needed no touching up.

The reception was held at her parents house on Rock Hall and many of the people we know from our little town were there. So it was fun to dance with them and sit with them at the celebration. My husband and I are the ones on the right in the orange dress and blue shirt.

We had to scoot home too early as it was an hours drive away. And thankfully the rain didn’t let down until the end of the night. So Christina remains a lucky bride. I think it’s so important to attend weddings to remember the promise of the union of two people. And these two have so many people who love them, the toast speeches were wonderful. The food was fabulous. And the tent lighting, if I must brag, looked great. Congratulations to Tina and Dan Divilio.

If you are getting married on the Eastern Shore of Maryland, Baltimore, Maryland, or In the District of Columbia and were thinking about lighting for your event, give my husband a call. He’s a great guy and talented too. 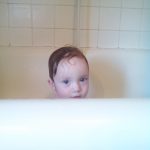 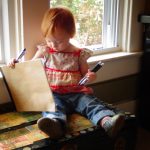