Back in January, a friend sent me a link to a blog university conference ’14 happening in Baltimore in June. There was really no way I could say no. It was in my hometown so I could drive there. And I have done a lot of talking about moving onwards, making the blog more of a career and professional endeavor and less of a personal whatever sort of blog. So this conference would be just the right choice to make towards that goal, right? Expectations will mess you up people.

I chose to sleep at a hotel instead of bunking in the dorms. I had expected to just enjoy the time away from my children and be alone. But the week of the conference consisted of the viewing and burial of my sweet father-in-law Terry Peach. And on Friday, I’m driving up to Baltimore with what ended up as a nasty head cold from my son. Needless to say, I was sick and not sleeping well either.

I changed into my first dress and met a group of conference goers at Alonso’s/Loco Hombre’s on Cold Spring Lane. Ironically, I worked there in my 20’s. Looks different except maybe the package goods area in the front where we used to get our underage alcohol eons ago. Chatted with two other late coming gals for a while there and then off to what I used to know as a college but now has become the Notre Dame of Maryland University.

This all women institution is slam next to Loyola , what is probably a University by now too, on a really really beautiful patch of land. The concept of the event and the women who made the enormous effort to pull it off were just as lovely. Blog U ’14 was founded to support other women bloggers in finding their tribe and their community. And to help us garner knowledge about making our blogs better businesses, educating us on writing for money, or being better social media users. They stressed that there should be no knowledge that people hold onto and don’t share. The world of the internet is far too large and the concept is slightly silly.

I came to the conference telling myself the following things. I needed to move on. Don’t stay at job too long and when you’re overdue for a bail out, it’s sad for everyone. Being a stay at home baby’s Mama offers up all sorts of reasons to not risk change and just implode. The longer you’re out of circulation, the more you feel like maybe you can’t anymore. Great reasons for change. Need to progress and not regress my career.

But there I was at the sign-in knowing no one and feeling so much like a fish out of her ocean. I couldn’t find my name tag at first. I would eventually end up leaving it at the hotel room for the conference day. Symbolic much?

While excited women chattered to each other, I grabbed a Berger cookie and killed time taking pictures.

I was lucky enough to sit on a picnic table directly under a robin’s nest full of baby birdies whose mama was feeding them. I called home as this woman was doing. Her little one had been to camp and they were doing face-time together. So cute.

So there I was, all dolled up in my very bestest clothing and shoes and my new card carrier to show everyone I meant business. Except I was ill prepared. (And apparently ill.) For many reasons, some being the funeral and some being silly me, I hadn’t really made any real people connections beforehand. And I felt wholly disconnected when I stepped into the registration building and then the gymnasium for the opening ceremony. Lucky me, I then got picked to read one of my blog posts out loud. And they posted me doing it on Twitter.

I had total readers remorse that night. I’d picked the wrong reading. Mine was way too long and I was so nervous, I lost my mojo. I read Bras or Bust but I really should have read Gathering My Lessons : Lesson #153. What was done was done. The best part of the evening was getting acquainted with two women who sat down next to me. Emily and Lillian were so supportive and approachable and they would end up being my takeaway prize-winning tribal moment. Days later, Emily still insisted I read well, bless her heart.

Thanks for sticking with me. I’ll finish up my long-winded tale on Friday and do a brain purge on Monday. 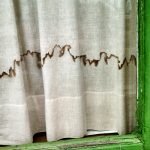 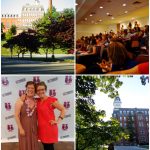