She was one of my favorite customers at my shop, Bally Eden. When I met her, I thought it an odd coincidence she graduated from a college in Rhode Island where my sister lives and that we both ended up here in Denton, Maryland. Desperate to find a kind dentist at the time, she then told me her husband was one. And he’s been ours ever since.

So Abby McNinch is running for re-election tomorrow for her Denton town council position which she’s held since February when she stepped in to a vacant seat. Here is the link to her resume. And she’s qualified alright. My inquiring mind wanted to know why she would want to continue a job that seemed to me to be, well, boring and thankless. So we lunched at the Pub for my impromptu unprepared interview.

As we passed baby Fiona back and forth, I described my image of the town council as stuffed Puritanical shirts who get in their own way. She assured me the council gets a bad rap. That there have been council members with strong personalities who didn’t practice diplomatic restraint. And those occurrences overshadow the accomplishments.

Abby says she’s not known for being a pussycat. She’ll head straight into the storm if need be. And when the inevitable bumps are hit while making decisions for a town’s well being, she would like to use her diplomacy skills to facilitate progress. Or at least not lose ground. Noble enough aspiration I’d say.

Currently the town is involved with the renovation of the schoolhouse on Franklin Street for the Chesapeake Culinary Center. I was on the CCC’s board and created a new logo for them and am thrilled this project is progressing. Other town projects include the continuing development of a visitor’s center in Crouse Park, our waterfront park. And the weighty issue of a tax differential for the town. Seems we are sort of paying taxes for some things twice. See those items listed in the town’s website council’s agenda here.

Abby’s integrity is on her sleeve and she isn’t running for an ego boost or an identity. She’s a wife, mother, and co-shop owner of Joviality. She believes, “If you’re not part of the solution, you are part of the problem.” This is not about her, she says. It’s about doing the right thing for the town she lives in and raises her three daughters in.

I had suspected and she proved that we are alike in many ways. Self-promotion is hard for both of us. Many people have said to her, I couldn’t do it. I said it too. Abby’s a sure bet kinda gal but the election process is a game of chance. I’m sure she’ll be glad when it’s over. But it needs to happen. And as many people as are able to vote should. American democracy starts in small towns. This is our country in miniature.

And although I like both the McNinches, the opinions here are not compensated. She did support me when I had a hard time asking for votes recently in the Mommy blogger contest. And knowing how hard it is to ask, I will ask for her.

If you live in the Town of Denton, town voting is tomorrow. Show Abby and the other two women running some love. Participation is a duty I take seriously. And for once, I know who’s running. 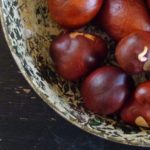 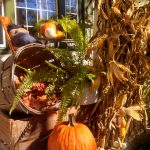 Fall Fell On the Porch