And now for the big fun. I love me some Halloween.

Before Mark, I can’t remember a Halloween I didn’t dress up for.

While living at 3608 Roland Avenue in Hampden, Hon, I had a few memorable costumes.

While a waitress at Café Hon, how could I not dress up as a dead waitress.

My friend MB, on the left, was Princess Grace of Monaco.

I had me a Halloween party. And was happy and shocked when my friends Felicia came dressed as the same character as I was.

Her name is Death. She’s a character from a Graphic novel called Sandman written by Neil Gaiman.

But the biggest costume I ever endeavored to pull off?

That would be the year I shaved all my hair off to go as G I Jane.

I’d say I did a pretty good job pulling it off, wouldn’t you?

My girls Bonnie and Sally are with me on the porch of the Golden West Cafe on the Avenue, where I was the sole employee when it first opened.

And that is where I worked when I started dating Mark, my now husband.

The next year we dressed up as a pirate and his cabin boy. The picture may make him look drunker than he was. I said may.

I was very pleased with the mock pilgrim shoes I fashioned for him. Silver buckles are tied on. Note the golf sock tan.

And last, but not least, our cleverest co-costume…

The pimento loaf and cheese sandwich. This shot doesn’t do it justice. Nor does it flatter.

The costume was so cute though, it won another couple a prize at a costume party.

And this concludes my very own costume parade.

Today and tomorrow are the last two days to vote for me, either here at the badge to the right in the sidebar.

I truly appreciate all of your support and efforts.

Last day of 31 Days of Pretty Pictures tomorrow. I can’t wait to see what it will be.

No really. Seat of my pants at the end here. 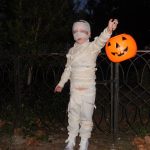 My Kid’s Halloween Costumes Through the Years 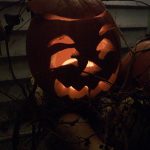