With a heavy sad heart, I convey the news that last night, Mark’s Dad passed away while in hospice care. He was released from his tired body and has moved on to his soul’s next purpose. His passing was at the end of a gradual decline as we watched congestive heart failure take him day by day. To know that he is no longer suffering is an immense relief to his loved ones although it’s hard to explain to a 9 year-old what that means. Wanting someone to die to have them no longer be in pain.

Pop Pop was dear, funny, and generous with his love and care. Two miracle granddaughters were born last year and I never saw him happier than when he was gitchy-gooing a grandbaby.

My son was asked to do a project in school on a family member who had served in the military. Pop Pop served on a destroyer for four years during the Korean War, starting at age 17. So this is the paper quilt that Eamon made to commemorate him.

The pieces are different scenes from the story of Pop Pop’s ship and how he was feeling about serving his country. I retrieved the art piece today from Eamon’s school so that we can put it on display at the funeral parlor.

Pop Pop’s and Eamon’s birthdays were so close together in April that we often had joint parties for them.  This photo below was just 5 years ago. It was and wasn’t so long ago, you know?

These will be the memories I will hold of him. Him loving on Eamon and Fiona. His cheering Eamon on at soccer and baseball games. And that incident where Eamon threw up on himself at the McDonald’s inside the Wal-mart in Easton, Maryland, and Pop Pop stripped him down on the tailgate of the SUV in January to put him in clean clothing. He was a take care of it kind of guy and I am immensely grateful that my husband is much of the man I love because of him. We will miss you Terry. Say hi to Uncle Dick for us. 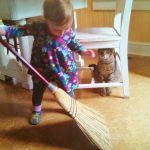 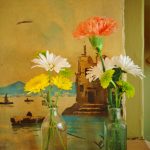