( Enjoy this post From 2015)   Belief is the word of the week, of the season. Wrapping up the year, this concept means the most to me now. And so I will start and end on what the word belief has meant to me recently in hopes that I can both make sense and find closure in the way I see things to be now.

I believe in the wonder and joy of the spirit of Christmas. That the generosity and kindness of man and womankind can rise us above our basic tendencies of smallness to bring about great moments of small humanity. That is what Christmas is to me. But to a child, the season is Santa. And the wonder and miraculousness of his visits is a gift every child should be able to enjoy until it’s time to move upwards.

I had the tragic privilege of robbing my eldest of his belief in this magic a couple of weeks ago. He kept asking me and asking me, was Santa real? And finally, when he said he was going to make an addendum to his Santa list when I’d already shopped, I told him…

He cried the biggest crocodile tears for the longest time. And as I watched the big beautiful bubble of belief disappear after several outbursts of tears and “no no nos”, I doubted my decision to have done this but alas, I could never take it back, could I ? He declared he’d prove me wrong. I certainly hope he does. And then I told him to talk to his Dad about the tooth fairy.

We believe what suits us don’t we? If our beliefs perpetuate a certain end or means to that end we can’t comprehend being without, we’re tethered then to our beliefs. We’re invested. We’re living in our belief suit. Until someone rips it off of us.

I found my esteem feeling quite naked after a recent incident robbed me of my self-belief. I was left wondering if I was in fact a talented designer. If I was worthy of the accolades I’ve ever received. If the inkling I keep having that maybe I don’t suck was true. Comes down to what I really believe is the truth.

I believe that I have a light that shines brightly. That that light is different. And that it’s meant to keep shining so that others can benefit from the hope that it brings. Because when they’re ready, anyone can join with me in the belief that their creativity and voice can make a difference. I believe my belief affects other people’s beliefs. And that is nonnegotiable.

I make happen what I believe possible. So that is what I am going to focus on. Shifting my possibilities to believabilities. And relying a little less on what I think might be the awful truth and more on what I know to be true. I’ve got talent in spades. I just need to figure out where I’ll be appreciated and believed in and mirrored back safely.

Merry Christmas to you all. May the magic of Christmas renew your belief in yourself and in humanity. I’m taking a holiday hiatus and will return in a week. Love to each and every one of you my dear dear readers.

My Christmas Gift To Me 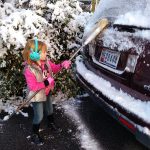 Of Cobwebs and The Creative People, I am No Longer

Stillness Thoughts in a New Year