The same week from hell that was my birthday found us looking skyward searching the roofline to source out the noise we kept hearing. It was a loud clattering and hard to ignore. So when I saw the little heads peeking out of the aluminum soffit hole, I knew we were in trouble. And when I saw the shreds of wood falling onto my porch, I was even more aggravated. Not only was the Fokker family nesting in my eaves, they were shredding my house.

My son and I looked up the definition of rodent one day out of curiosity. It simply said “those that gnaw”. Those cute scurrying furry tree critters had sussed out my house for their home and when they felt too lazy to go out and gather leaves for bedding, they started chewing on the trim work I can’t see up under the aluminum sided soffit. Every time I went outside, I heard their clatter and looked up yelling, “I hear you up there.”

See, my neighbors had experienced run-ins with the neighborhood squirrel gangs. They’d endured nesting and scampering under their roof. Mary had been the be-Jesus scared out of her when a baby squirrel hissed at her. When they opened up the roof, they found these rodents had chewed down and compromised the roof joists. And out my other window, I watch these critters crawl through the slats on the bell tower of the church next door. My arrogance had me thinking it wasn’t going to happen to me. But they showed me.

I called my carpenter and resident huntsman, Mr. Neil, to ask if he could seal up the holes. This is what he said, sort of, ‘cause he’s a country man and I’m a city girl, so I’ll translate. “You’ve got to get rid of the Fokkers first. They’ve decided that your casa is their casa. And you’ll not dissuade them.” He said he had a trap and to tie an ear of corn inside of it and set it up on my roof. Had he known I’d be climbing out onto my roof, he may have come over and done it for me. And, having trapped them,  I could chauffeur them to the local State Park and let them go.

So we wire tied my eight dollar corn from a local supply store the games began. One by one, I caught the three Fokkers and their friend, and drove them to the Park. I chose camping pad eleven in loop A because it had a lot of woods behind it. And I kindly left an ear of corn as camping supplies for them while they got there bearings. Then I called Mr. Neil back up and he and his man Greg returned and patched up my soffit holes. I nervously listened for any signs that we’d entombed any squirrel. Nothing. I appreciated the silence.

We rode bikes around the camping loop yesterday and hollered a greeting to the family as we went by. “Hope the country squirrels didn’t give you too much of a beat down for being city squirrels.” They’ll be safer there if they survive the gang wars. Driving yesterday, I passed a just run over squirrel convulsing on the road and  felt horrible. This time of the year it’s tough not to notice the deer and squirrel bodies littering the roadways. And then I remember, starvation due to overpopulation is pretty sucky too. If the Fokkers are the fittest then they’ll survive in a new home in the woods with a steady supply of campers to feed them Cheetos. 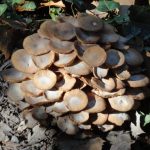 There’s a Fungus among us 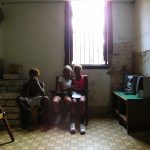