My Husband and I chose to steal away this Thanksgiving to the beach at Ocean City, Maryland for a two-day holiday. The little boy will be with us but it will be the last “vacation” where he’s the only child. Due date is February 27th. A Butterball turkey scored at the Giant for $1.19 lb inspired an early feast this past Sunday complete with mashed potatoes, gravy,whole cranberry sauce, and apple pie. Yum.

I had every intention to set a beautiful stylized table and take pictures. I started on Thursday but each attempt I made to artfully display stuff ended in my unhappiness. And suddenly, it was Sunday and I was cooking. So my boy and I went outside and picked mums and to fill Grandmom’s vase and the two cornucopia vases I love. The freshly polished silver candlestick holders remained empty as I’d also forgotten to buy tapers.

Things never turn out the way you expect.

Today, I needed a few items at the grocery store and dashed off with my freshly snacked boy.  Except, he was just awful. I had spent all day repainting his room and I was exhausted. This child was pestering me for stuff left and right and sassing me. He even hit me in the stomach. Not cool. I didn’t recognize him and my supply of patience was fast exhausted. When we were almost done, I asked if he needed to use the toilet. His edge was suspiciously familiar. He denied and declined the opportunity. Again at the checkout, same deal. By the time we reached the car, I asked that he not speak to me until we got home.

And what do you know that rotten little egg did when we got into the house? He went and peed. I was done. I asked him to stand right there as I explained that he just earned five negative points for lying and three negative points for sassing me. His point chart had been zeroed out. Big goose egg went on today’s space. And I asked that, while I made the dinner, he sit and write me out an apology for all the things he’d done to upset me. And this is a picture of what he presented to me.

As I said, things never turn out the way you expect.

I hope everyone gets the nice kind of little unexpected gift for this holiday. Keep your eyes and ears open for it. 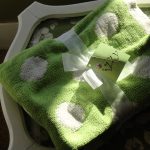 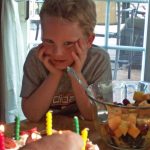 Trouble at the Table